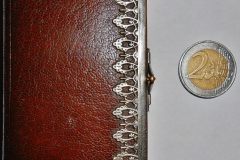 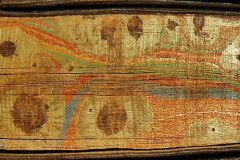 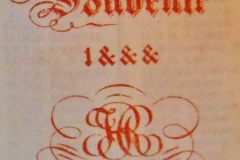 Written on the cover page: "Small calpine that belonged to General Boulanger… before he left for exile. // Dumont d'Urville Street 11bis Paris 1889 ", his address at the time. 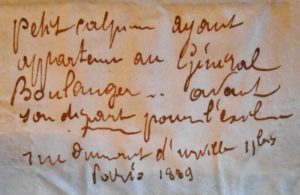 This miniature agenda, in addition to the rental prices of the main theatres and the prices of the discount cars, contains appointments for lunches and dinners 19 May to 19 July. Guests include artists, Carolus-Duran, Detaille, Falguières, Marquet de Vasselot (30 June), his political friends Dillon, then Rochefort (9 June) as well as Renan, Countess of Loynes, Xavier Feuillant, Jollivet, Naquet, Billing, Duchêne, Demery, Dubuisson or "Le Comité". 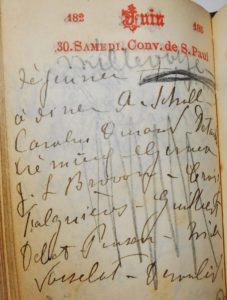 General Boulanger had been Minister of War in 1886 ; elected Member of Parliament for the North in April 1888, he becomes the leader of the nationalist camp in the Parliament. At the head of his movement, the “boulangisme”, he then leads a vigorous campaign against the government. He calls for the revision of the Constitution and for the dissolution of the parliamentary assembly. The 12 July, he faces Council President Charles Floquet ; the two men will go so far as to fight in a duel in which the general will be wounded. Having resigned as an Member of Parliament, boulanger will be plebiscious again in new by-elections. In the country, the agitation of the people is at its height. The government reacted by denouncing the “boulangist conspiracy”, and issues an arrest warrant for the general, April 1889. Boulanger went into exile in Brussels in April. The 14 August 1889, the Senate convened in the High Court of Justice sentenced him in absentia with Rochefort and Count Dillon to "deportation to a fortified enclosure". The movement he embodied began to flow back quickly ; September parliamentary elections 1889 are not in his favour. Boulanger will die in Belgium in September 1891 : confused by the disappearance of his mistress who died of a phtisia, he will commit suicide on her grave, inconsolable lover…

This "political and greedy" notebook plunges us into the intrigues of a crucial year for General Boulanger and the IIIth Republic.