Original Edition published shortly after the death of the author by the care of Andreas Lamey secretary of the Mannheim Academy of Sciences whose Palatine Elector wanted the work to be devoted to history.

Jean-Daniel Schoepflin (1694-1771), alsatian historian, taught history and Latin eloquence at the University of Strasbourg. Because of his publications on the history of Alsace and the surrounding countries, as well as his work as a princely genealogist, he gained European fame that took part in the university 'golden age' of Strasbourg in the 18th century.. He is the author of L’Alsace Illustrée published in 1761, one of the most important works in Alsatian history, as well as one of the founders of the modern historical method.L’Alsace diplomatique is a collection of charters that have been used in l’Alsace Illustrée, some of which have disappeared, such as Charters II, 117   n° 899 , 2.I.1316, II 160 n° 975 , 8.XII.1337 and II 287-288 n° 1215 7.III.1390 of the Landsberg family. 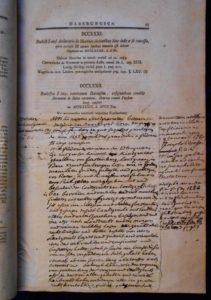 A work copy of Jean-Baptiste-Joseph Gobel who has heavily annotated it, and from which he drew from many historical sources when he was working on the treaty of exchange of parishes between the diocese of Besançon and the bishopric of Basel, treaty signed on 17 November 1779 ; on this occasion, Porrentruy, Cœuve, Buix, Boncourt, Bonfol, Bressaucourt, Bure, Chevenez, Courchavon, Courtemaîche, Courgenay, Cornol, Courtedoux, Damphreux, Beurnevésin, Damvant, Fontenais, Grandfontaine, Alle and Montignez returned to the bishopric of Basel. Gobel, born in Thann in 1727, auxiliary Bishop of Basel with the title of Bishop in partibus of Lydda, was also one of the writters, with Vergennes, of the treaty of alliance between the King of France and the Bishop of Basel in 1780. In 1789, Gobel is elected as a Member of Parliament for the Etats-Généraux by the clergy of the districts of Belfort and Huningue, and constitutional bishop of Paris. He then incited the government to occupy the bishopric of Basel. France, pretending the presence of the Austrians, invaded the bishopric on 28 April 1792. He was then appointed civil commissioner in the country of Basel where he was accused of abusing his power. Hébertist, he was guillotined on 13 th April 1794.

Les 2 volumes with his ex-libris armored engraved in each ; one is half ripped off. 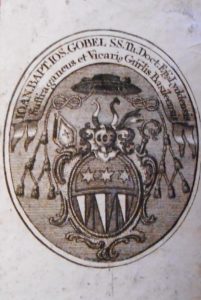 Lower angle of p. 168 in vol. I cut out without lack of text, few foxing. Skillful binding restorations. Exceptional document.