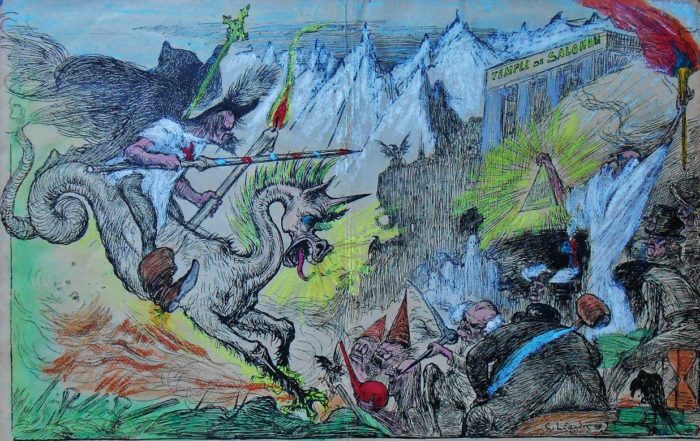 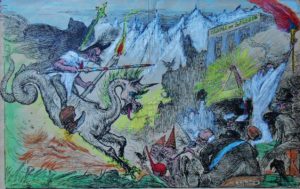 Jules Lemaitre (1853-1914), member of the French Academy, antiDreyfusard and president of the Patriotic French League. Few documents about Freemasonry. Autograph manuscript signed twice " Jules Lemaitre " (on the 12th page), no place no date [around 1899]. 13 numbered pages in montage of texts pasted on the front of the 13 in-8-degree sheets. Blue and black ink. Illustrated by Jules Lemaitre going to war against the Freemasons. Black print enhanced with pastel of colors, pasted on strong paper (30 x 44 cm) published in the satirical weekly Le Rire, n° 258, on 14 Octobre 1899 ; the drawing is subtitled : "While the divine Coppée rests his tired body from the battles… the valiant Jules Lemaitre courageously descends into the dark stay of Freemasonry".

Interesting anti-Masonic document to be published.

Jules Lemaitre lambasts the occult influence of Freemasonry on political power and poses as a victim of Masonic "intolerance".

This is the fourth article he has written on Freemasonry. "It won't be the last. Repetition is an incomparable means of action. " He intends to deliver to his readers the documents he has proving that Masonry is "a political association and a secret association, you already know; but you will be even more convinced when I have put before you a very small part of the documents that I have. I'll give them to you in a raw and without interweaveing them with comments: they're pretty significant by themselves. "

Follow, under the title "Freemasonry is a political and oppressive association of freedom of conscience" (pp. 1-4), numerous excerpts from the reports of the Convents from 1893 to 1898 highlighting the fraternal parliamentarians and the great influence of the Council of the Order on the Chambers and the Government ("Wish Pochon", fighting congregations, recording, Leon Bourgeois and his ministry, Council of the Order's grip on elected officials via the Provincial Lodges, etc. ) ; however, he can't help making few comments: "Five, at least, current ministers are Freemasons. We know some of them. 166 in the Chamber of Deputies. As for the Senate, it's, for a good half, only a sinister Lodge, a dark collection of Venerable. Once MPs or Senators, some Masons try to escape the Lodges. But these cling to each other. In 1897, a B. ingenious proposals to establish a permanent Convent in Paris where parliamentarians would be delegated to their provincial lodges. ".

Other excerpts from the same source, under the title "Freemasonry is a secret association " (pp. 5-8), talk about Masonic secret, including membership in the Order. The writing is more applied and more readable, the notes are probably older ; further, Lemaitre scratched all the names of the Brothers he had quoted. He annotated, regarding the report of the Convent 1897 : " The volume is not deposited at the National Library. It highlights : "This report is not intended to be published ”. » After these uplifting quotes, the author delivers his own commentary (pp. 9-13). "Masonry is a political association, particularly enemy of freedom of conscience, and Masonry is a secret association. This means that it is twice tyrannical. » He is not aimed at practising Catholics, but "to all independent minds, to all the slightly delicate souls, to all the free-thinkers worthy of this name so often usurped by who are neither free nor thinking, to all those who have a sense of justice and respect the dignity of the human person. " He defends, in passing, the congregations: "Isn't it abhorrent and foolish to hate and to want to outlaw fellow citizens which, moreover, make up a considerable fraction and perhaps the majority of the nation, only only because they admit a supra-scientific explanation of the universe and because they conceive otherwise that you the "unknowable"? ". He is standing as a traditionalist, defender of "a tradition that cannot be denied that it inspired our forefathers virtues that once contributed to "making" France. " He defends the freedom to think and even calls for freedom of thought Auguste Comte « one of their gods yet » who "would not have enough contempt for these violators of the most sacred right of a human creature: to interpret according to its strengths and moral needs the enigma of life. » Even if the Freemasons, "some soulless politicians, others, illiterate fanatics - don't have very great brains", that's no excuse, "you can always be fair and good, or try to be ". 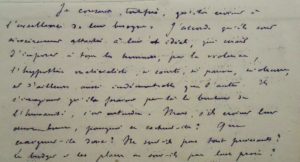 He acknowledges, however, the masons' sincere belief in their ideal " which would be to impose on all men, by violence, rationalist hypothesis, so short, so poor, so unclear, and, moreover, as indemonstrable as the other ". Considering their cult of secrecy, hecalls into question the purity of their intentions. "But if they believe their work is good, why are they hiding? What do they fear, then,? Aren't they all powerful? Aren't the budget and the positions their prey? Don't they enjoy a freedom that is denied to me? Why are these men who give send their watchword to ministers and half of parliamentarians do they work in the shadows and are they fleeing responsibility? … This love of darkness, they could give the reasons: but wouldn't these reasons have a few things a little dishonourable to them? " He declares himself tolerant, "tolerance being the charity of the mind ", and calls for equal rights for all. Provocative, hewants to be tolerated as if I were a Freemason " and adds, however, that he feels "to the Sons of the Widow, deep mistrust, justified by the darkness where they evade. And I would like the good people of France to be shameful considering the exorbitant role that may have played, for twenty years, 16000 occult tyrants, 16000 enemies of freedom of conscience (This is the approximate figure of the G. O. of France; I leave out the 8000 adherents of other rites that have much less varnish.) He compares the tyranny of the Congregation under Charles X to Freemasonry under the Third Republic, "except that the Jesuits certainly had more individual virtues and that Catholic dogma implies, after all, commandments of Charity and Universal Assistance. Will we be dominated by these red Jesuits who make fun of the poor people […] while caring very little about making this life better for them, have not not even a paradise to promise them? » He comes back to his usual conclusion, i.e. the victimization of the French League of the Fatherland of which he is the president and the impunity of masonry. He wants Freemasonry to be tolerated but asks "that we also tolerate our League, that is not political and has nothing to be secret. Pursuing us as we do, while they are left alone, it's a monstrous injustice, and so cowardly! And the thing becomes quite unspeakable and perfidiously [?] fantastic, when you think that the Head of State, five ministers, 166 MPs and perhaps 200 senators belong to a political association, secret and unauthorized! And finally, it remains deeply absurd and unconsible that, while I am brought before the investigating judge, we refuse to prosecute the president of the League of Human Rights. " [The LDH was created in June 1898]. After signing, and barred his signature, he adds in parentheses "(will be continued as as long as it takes) ". He signs again and adds in P. S. "To those who are still scandalized by the arbitrariness . The French League of the Fatherland temporarily abstains from any public demonstration, but our lists remain open. Under whatever tyranny we live, there is no law preventing me from receiving signatures that that will just want to say simply: we find it good that the French propose to "maintain and strengthen the love of the homeland and respect for the national army and to enlighten the public on the great interests of the country. ” "