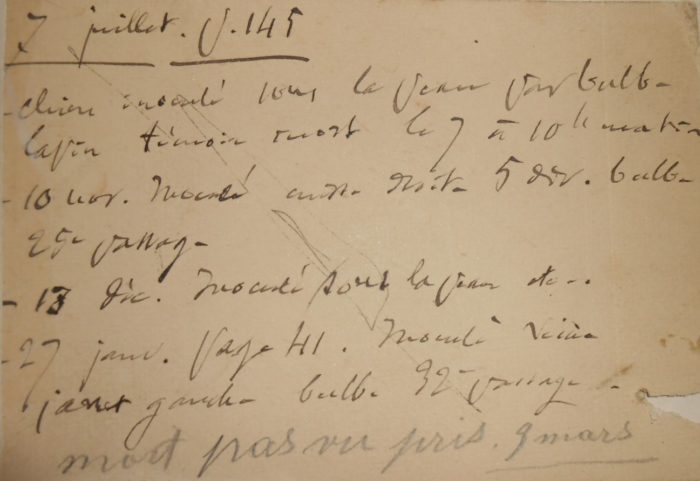 Original edition of Pasteur's first biography, written by his son-in-law.

Copy of the Journalist, man of letters and academician Jules Clarétie with his gilt cypher on the back, enriched with a signed autograph letter addressed to him by the author, and with 2 Louis Pasteur's autograph cards, notes from his research on the rabies vaccine, all thumb-indexed. With 3 press articles published in August 1940 announcing the suicide of Joseph Meister, first child saved from rabies by Pasteur, then concierge of the Institute.

Beautiful evocation of Pasteur by his son-in-law, a few days before the announcement of the discovery of the rabies vaccine. This letter also explains the provenance of the two precious files of the scientist.

[…] Don't feel sorry for your lost card. I will choose another one of which each line will testify, like the one you had, a patient research, a laborious or ingenious effort, a new step finally in the stages of the experimental method, understood by a man of genius.  […] For five years, I spent many hours in the intimacy of M. Pasteur, taking each time the impression you felt and that pushed me, ignorant, to try the story of this scientist. His modesty, which you were so struck at, resisted my project as a biographer.. “But my life, he said, will not be of interest to the public.” And when the public made my little book a success how would I say ? as a bad book, M. Pasteur was charming with candid astonishment. He didn't seem to suspect that I had spoken about a beautiful subject.. […] How you judge him well this great man who is so good! I knew what I was doing by asking you to come to the lab. M. Pastor thanked me as you thanked me yourself.

The 19 May, will be published on 1st cover of Le Figaro , newspaper in which Jules Clarétie collaborated,  the article "No more rabies! ", unsigned, announcing Pasteur's discovery of rabies vaccine. The same day, the scientist read to the Academy of Sciences his "Note on the prophylaxis of rabies", reread the next day 20 May at the Academy of Medicine.

There are, mounted after, the two precious autograph cardboard cards by Louis Pasteur that Vallery-Radot had offered to Jules Clarétie. R.Ink and pencil written, thno place and no date [Paris, ca. 1883-1884]. each 10 x 7 cm. 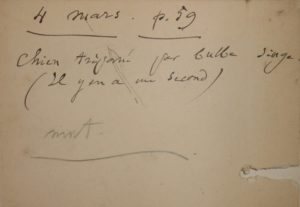 (There is a second one) 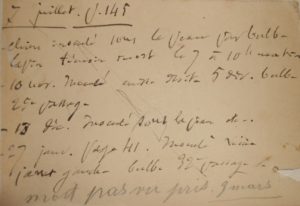 Dog inoculated under the skin by rabbit medulla

13 Dec. Inoculated under the skin etc…

[Back, in pencil :] "28 February trepanated by medulla

With an invitation card for the inauguration of the Institut Pasteur, on 14 Novembre 1888. 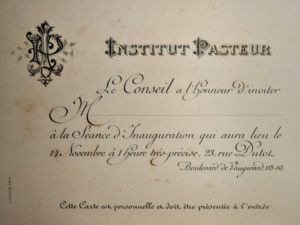