Beautiful unredacted letter; indeed, Langlois published it, but by correcting and omitting unwelcome passages from Proudhon on Poland, daily newspapers Le Temps and La Presse, Louis Ulbach, Jules Simon and Victor Hugo, probably to protect the memory of the philosopher, Langlois having been his friend and then his executor.

The writer talks about his desire to return to France, his work on literary property (the Majorats littéraires), his virulent criticism of Ulbach and the Société des gens de lettres and of the French government, his editorial calculations as well as the Garnier brothers, his work on Poland and the Poles about whom he is most cynical, and finally the Miserable by Victor Hugo that he scratches in passing!

Gustave Chaudey, born in Vesoul on 5 Octobre 1817 and executed in Paris on 23 May 1871, is a lawyer, French politician and journalist. Reporter for La Presse from 1845, he assisted Lamartine and supported Cavaignac at the beginning of the Second Republic. After the victory of Louis-Napoléon Bonaparte in the presidential election, Chaudey is admitted to the Bar of Vesoul; he was an opponent of the coup d'état on 2 December 1851. In 1865, he will be one of Proudhon's executors of his will, he had defended him at a trial in 1858 (about his publication of De la justice dans la Révolution et dans l’Église).

Received and devoured your so good letter from the 2 February. Why do you have to have so much work? that it would be sweet for me to talk with you more often! But patience: this exile will have its end; Belgium no longer offers me interest, and if it is not nostalgia that soon drives me away, it will be boredom.

My work on literary property has lengthened more than I thought. This will make 100 to 120 pages. I have addressed the issue about the economy completely; I added considerations of aesthetics and public law. 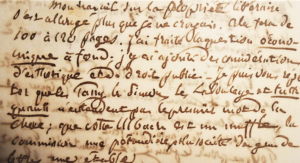 I can repeat that Passy, Simon ["Simons" missing in Langlois], Laboulaye and all of them do not hear the first word of the thing; that your Ulbach is a lout [sic] [Langlois replaces "lout " by "paradox maker"], the commission a boiler room, and the society of men of letters a stable.

Unfortunately, I don't think anything stops the government, supported by false democracy. It's a fantasy that we want to do without, like the free trade that is causing thousands of French workers to die. But I will at least have the pleasure of opening the eyes to solid minds., and to warn neighboring states....

I write to MM. Garnier, to whom I am thinking of sending my manuscript next Thursday. As long as the discussion does not come for a month, that's enough. Otherwise, I should delete my publication. So say orally to Gouvernet, who will give you this note, and will let me know your answer, if you think positively that the project will not be brought to the legislature before the end of the session.

Gouvernet will make the same request for me to Darimon.

You fear that my theory of property will harm my work on Poland, and that these two questions do not get in the way. Don't worry. I wouldn't have write a book about Poland for the pleasure to deny M. Peyrat, and to prove to the Poles that they are indeed dead [" indeed dead" replaced by "in a wrong way"].

I was looking in the story for a sequel that could serve as a framework for my theory., when the discussion between Elias Regnault and me broke out in the Presse ; and I saw just now that Poland was precisely what suited me best..

The end [" The end" replaced by "The vicissitudes"] of that nationality is not [" is not " replaced by "are"] here as only an accessory, a demonstration fact; the basis of the work, that's the idea.

Moreover, anything I could tell you here would only give you a misconception of my [wo]rk; so let's not talk about it anymore.

How do you find the result of the discussion on the election of M. Pamard ? Can you have faith in this system or on 10,000,000 of voters, 6 million [6,000,000 by Langlois] vote; and on 6 million [same remark] of voters, the four-fifths, obey the inspiration of the government.

How the Temps stinks me! [stinks me : disgusts me, makes me sick (out of date)] even more than the Presse. [both sentences completely deleted].

We work here hard to the printing of the novel of V. Hugo, the Miserable. – Someone assures me that if it's not miserable, it's not Superhuman. We'll see soon. [The two sentences: "Someone " to "soon " deleted.]

To you, and see you soon,

P.S. I forgot the most important thing. It is the Garniers who will publish my work on prop. literary. You will not refuse, on this occasion, if applicable, to give them, for me, your opinion.

Small lack affecting half of a word without interfering with comprehension, small tear without lack formerly restored.