1st and only edition, in which Jacques Le Brigant (1720-1804), imagines that Celtic is the mother tongue of all idioms and claims to be able to understand many languages. His motto, as his program, was : " Celtica negatur, negatur orbis " ("Who denies Celtie, denies the Universe"). It was nicknamed " Prince of Celtomanes ". He founded, with Jacques Cambry, The Celtic Academy on March 30 march 1804. (Brunet, VI, 638, n° 10528).

In this essay presented as a "prospectus" of a great treaty that never appeared, the author gives the essence of the research that occupied part of his life and which led him to give up his duties as a lawyer in the Parliament of Brittany : to prove that Celtic is the original language, mother of all the others, and search for its derivatives in ancient languages, the oriental languages, especially Chinese and Sanskrit, the "Caribbean" or the Tahitian. Comparative tables, an essay on the translation and critical analyses of Celtic dictionaries make it one of the first comparative linguistics essays. Another member of the Parliament of Brittany, physiocrated economist Louis-Paul Abeille was involved in the writing of this book.

Touching testimony of the difficulties Le Brigant faced in spreading its ideas of comparative linguistics. Encouraged by the favourable reception of his Eléments succincts de la langue des Celtes-Gomérites ou Bretons, specially from Séguier, one of the most eminent scholars of his time, Le Brigant, abandoning his office as a lawyer, and father of a large family, desperately looking for a benefactor, otherwise the support of the king, to continue his work. Here he gives a presentation and some excerpts that foreshadow the publication in 1787 prospectus entitled Observations fondamentales sur les langues anciennes et modernes. Pieces are bound without order. 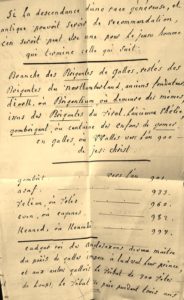 "If the progeny of a generous race, and ancient could serve as a recommendation, maybe it's one for the young man who finishes the one that follows  ". His ancestors, originally from Wales 900 after. J.C., immigrated to Ireland around 1002, then, stripped by Pope Alexander III, settled in Brittany in 1290, where they remained until James.

Copie d’une lettre de M. Séguier de Nîmes, the 17 July 1780. 2 pp. in-8°. Half autograph copy by Le Brigant. The botanist and epigrapher Jean-François Séguier, from Nîmes (1703-1784) ,congratulates Le Brigant on his work on the Celtic language, applauds his lights, shares his findings and would receive "the addition sheet where so many languages are demonstrated that they all relate to each other" to the Breton. Brigant added at the end "it's the one […] Mr. de la Condamine said: respect the good man because he knows more than all of us  ".

Handwritten copy of a letter from Mr.. Le Chevalier de la Coudraye, former ship's officer, and member of the Naval Academy, Sables d’Olonne, 13 November 1780. A very laudatory letter in which the Knight regrets, however, that the comparison of the Breton with 15 languages is not printed in his book [see the Démonstration des plus singulières…].

The Brigant wishes the protection of this lord well in court in order to propose to the king the object of his research. To this end, he addresses him "two small pieces that can be used as examples  " [probably the following parts]. 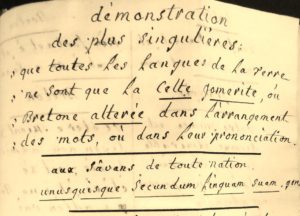 The author compares to the Breton the 6rd verse of the Psalm 138 "Your science has become admirable to me; She rose and I won't be able to reach itin Latin, French, Italian, Spanish, Catalan, Basque, Finnish, Swedish, German, Dutch, Flemish, English, Welsh, Galibian, Tahitian, Chinese, Manchu, Hebrew, Chaldean, Siriac, Arabic, Greek and pure Breton [sic]. He concludes that the words of these texts are the same as those of the Breton, which is, as a result, "the source from which all languages came, and the raw material, or the elements that served their creation  ". [see Eléments succincts de la langue des Celtes-Gomérites ou Bretons]. Faced with such obviousness, Le Brigant regrets, in a Europe that is still avid "for rare things  ", Colbert, Catherine of Russia, Isabella of Castile or Anne of Brittany, "able to discern the price of the discovery and make themselves forever memorable by supporting it ". 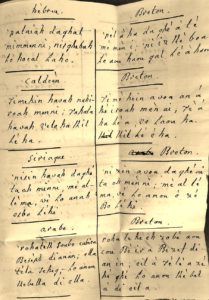 By aptonyms, the author gives "the exact meaning of these names interpreted to the letter, unequivocal, no change "as George Washington [who had just crushed the English at the Battle of Yorktown, the 17 October]

("Wasington, Voaxéén ké tou in, he was our protector, our brave defender in our suburb fortifications, our homeland, our nascent republic, you were our only hope  ") or Benjamin Franklin [which had just been recognised by France the new American republic] ("Franklin, literally férankélein, who divides, separates the upper part of the state, sovereignty, which subtracts part of the nation from a domination that has become intolerable ").

Brigant claims to hold very old sources and of Indian origin knowledge of the greatest importance, "especially for those who are called to be the teachers of princes, or leaders of nations. To facilitate this institution by remove thorns, disgusts, lengths, to perfect it and make it stronger  ", he proposes "the perfect knowledge of words " and " the understanding of a simple language, brief and perfect, the general key of all others who are just derived, or detached shreds: the same as the one Parisians spoke two thousand years ago and they still speak a little altered, without them suspecting or recognizing it  ". Brigant proposes "to show more in eight hours about the substance of languages, their essence, their origin, their mechanics, their creation, their relationship to another, that has been shown from Plato to Voltaire and from Aristotle to the last teacher of the French princes  "; he's so sure of himself that he doesn't fear any adversary. In note, Le Brigant complains about Necker: "Mr Necker promised to inform the sovereign of a discovery as beautiful as it was interesting; but it is rare for the foreigner to give the children of the house effective or sustainable protection. " 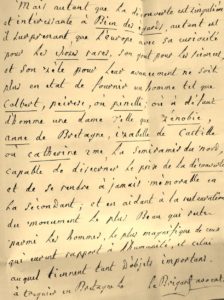 Le Brigant asks his protector for the favour of presenting to the king his linguistics work, valuable educational tool, according to him: "suddenly discovering a source that had not yet been known, Her Majesty in an instant would indicate the infallible and sure meens to facilitate, and perfect the education by abbreviating, and correcting the work of teachers. […] what the abbot of Condillac could not show the Duke of Parma; what Mr d'Alembert could not teach the heir to the Throne of Russia, what was not in line with the Voltaire's reasoning, who disputed its existence; and what Rousseau de Genève had only a little idea. Finally what no other has been able to manifest since Plato, up to the scientists these days. He concludes by presenting his wishes for the new year. 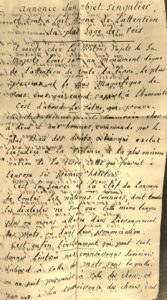 The Brigant presents its discovery. In the first place, he claims that the King of France reigns over the oldest nation on earth, Brittany, only Breton "is the source and key to the language of all known nations  ", and that it's finally "the instrument that alone can give entry to human knowledge  ". The author argues that all current languages come from Breton, proposes a way to talk them all, to understand them, "and to be absolutely foreign without any people where one could approach  ", and finally, what it is unique, to give "the certain elements and principles of the universal language, institutions of this language jointly, and by comparison with all other known languages  ". He proposes to demonstrate it "in eight hours, if we want to make it easier for him  ". He asks Her Majesty's help because "father of 22 children, nature treating him as a tender mother, fortune as a harsh, he was unable despite his taste for work and a non-interrupted application to maintain the balance of his needs and faculties  ". He stresses an important point : the object of its discovery contributes to the birth of the dolphin [Louis Joseph Xavier François of France, born on 22 October, eldest son of Louis XVI], and that it would help "to train an accomplished prince that would not risk "to be seen with an indifferent eye  ". 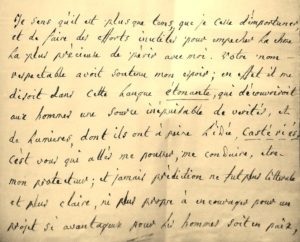 Le Brigant, despair of his project [about comparative linguistics] and writes to his protector, great Breton lord, who had supported him: "your respectable name had supported my hope; indeed, he was telling me in that language , [Celtic], who would discover to men an inexhaustible source of truth, and light, which they barely have the idea, " castériés ", it's you who went to push me, driving me, be my protector; and never prediction was more literal and clearer, nor a better incentive for a project so beneficial to men [,] either at peace or at war, on land or on water. Le Brigant attached a leave about aptonyms [Celtics?], "names whose meaning in this amazing language , refers to the events carried out by those who bear these different names ", and another on the project of "a port in our neighborhood, whose plan was before being executed under the reign of our late king  ". [see next piece]. 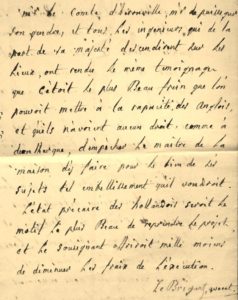 Le Brigant presents his arguments: the precarious state of the Dutch, protecting merchant ships from English pirates, a safe place for shipbuilding, and that would avoid the ships coming from India the point of Brittany and the looting of the English, and would be a shelter for the Dutch. He proposes to fortify the mountains that line the harbour, and specifies that valleys are convenient locations, as the Earl of Heuville and M. Puysegur testified ; they said that "it was the most beautiful brake that could be put to the rapacity of the English, and that they had no right […] to prevent the master of the house from doing for the sake of his subjects such embellishment that he would like.  " [Le Gonidec of Tressan had acquired the castle of la Roche Jagu on 1773 , high stronghold that always protected the mouth of the Trieux]. In conclusion, he proposes to offer "thousand ways to reduce the costs of execution". The port development project will not succesfull. 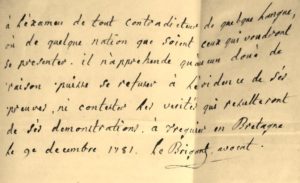 1st Greek translation of this book originally published by Didot in 1805. Fleury de Lécluse, distinguished Hellenist, is also the author of an essay on the Basque language and various linguistic works.

Ex-libris manuscript of Charles "Lecarpentier, June 1810  " ; Charles Le Carpentier (Pont-Audemer, 1744-Rouen, 1822), painter and art historian, professor at the School of Fine Arts in Rouen, member of the Rouen Emulation Society since its inception, was naturally interested in the Celtic origins of his city, and it is therefore not surprising to find in his library the book of Le Brigant, full of the author's manuscripts.

Slight wear on the binding. ,  very fresh inside. Exceptional and unique.