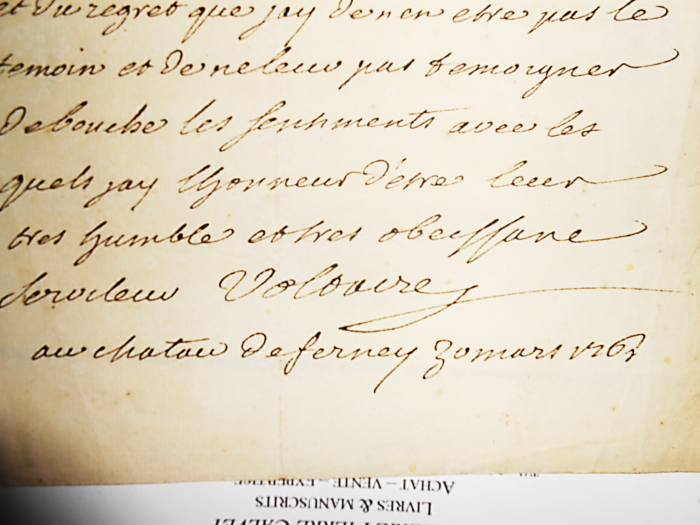 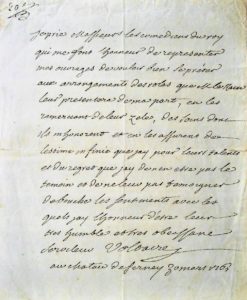 Beautiful diplomatic letter that Voltaire addresses to the troupe of the Comédie-Française concerning the restaging of Tancrède, his last great success in the theater.

Created the previous year, the piece had been restaged on 26 January, then successfully performed again on 7 March and from 2 at 27 April 1761. However, Voltaire, very demanding on the representation of his theater, reacted to Prault's edition of Tancrède, to which the actors had to comply, unfortunately " not printed as I did it […] fully altered and in a manner that, we said, shame me ", as he wrote to the Count and Countess of Argental on 29 March, the day before our letter. He therefore transmits his recommendations to the actors through his friend the great tragedian Lekain, member of the troupe.

"I ask the king'sactors who do me the honor of representing my works to be willing to be well prepared for the arrangements of the roles that M lekain will present to them on my behalf, thanking them for their zeal, of the care of which they honor me and by assuring them of the infinite esteem I have for their talents and of the regret I have for not being the witness and not to testify to them with mouth the feelings with which I have the honor of being their very humble and very obedient servant.         Voltaire

Tancrède, tragedy in five acts and in verse, was performed for the first time on the Théâtre de la rue des Fossés in Paris, on 9 March 1760. Voltaire had been very upset about the liberties taken by the actors., "about sixty lines of their growth quite easy to be recognized ", "almost every actor having given himself the freedom to arrange his role to his fantasy to assert his particular talents at the expense of the play " (to Prault, 16 December) ; as he wrote to D'Alembert on 8 Octobre: "Please […] do not believe that I did Tancrède as it is played in Paris. The actors broke my arms and legs. You will see that the piece is not so lanky. Fortunately Miss Clairon's game covered the nonsense that these gentlemen enriched my piece to put it in my tone.. '' Fearing an edition in line with the lesson of the actors, he'' spends the day and night correcting it from one end to the other ", and thinks it will be appropriate to take it back on St. Martin's Day. "We will need to transcribe all the roles again. There's not a single one where I haven't made changes " (to the Countess of Argental, 18 Octobre). "I hope that at the restaging, they will play my play and not theirs. They owe me this little condescension since I gave them the product of representations and print. " (to Thieriot, 19 Octobre). The 26 Octobre, he wrote to Lekain: "you will find a difference of more than two hundred lines; I urge that it be replayed following this new lesson […] it will be necessary for each actor to have his role copied, and it is no less necessary to give the audience three or four performances incessantly before you put the piece in the hands of the printer. [Louis-François Prault] ; do not doubt that if you delay, this tragedy will be stealthily printed; there is already some copies; I was made to hold a horribly disfigured one, and which is the shame of the French scene.'' Then, on 16 December, he recommended to conform to Prault's edition containing more than two hundred lines different from those of the first performance.. Already, on 20 March 1761, shortly before our letter,  he wrote to the actors of the Comédie-Française " to lend themselves well to the arrangements of the roles of Tancrède ".

Voltaire, with more than fifty pieces, was one of the most performed authors at the time; the Comédie-Française, that had included thirty of his pieces in its repertoire, including eight among the greatest successes in French in the first half XVIIIth century, made its apotheosis on 30 March 1778.

Henri-Louis Cain, said Lekain (1729-1778), Voltaire's most beloved actor who affectionately nicknamed him "Roscius "; he had made his debut in the Comédie-Française in 1750 in the tragedy of Ferney's master, Brutus, playing the role of Titus. He was one of the best tragedians of his time, innovative especially in theatrical and scenic effects. He played with Voltaire in Les Délices and Ferney where he was regularly invited; Voltaire was waiting for him in Ferney on 19 March, in vain.

Small tear on the edge of the fold, formerly restored.