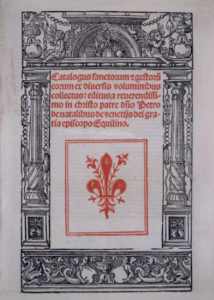 Beautiful and rare Lyon printing of the work of the famous Venetian hagiographer Petrus de Natalibus (1330 ?-1406), on behalf of Luc'Antonio Giunta in Venice, very abundantly illustrated with Venetian vignettes.

The work had been composed between 1369 and 1372 and first published in Vicenza in 1493; it was printed in Lyon by Jacques Sacon, en 1514 then in 1519, on behalf of bookseller-publisher Luc'Antonio Giunta (1457-1538) who had moved to Venice around 1480. Alde Manuce's competitor, he frequently called on the Lyon publisher between 1500 and 1522, marking the title page of his red lily, his name never appearing. 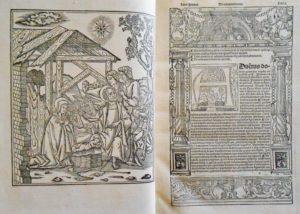 The work contains the lives of many characters from the Old and New Testaments, that of the ecclesiastical writers and emperors who promoted Christianity, legendary heroes and a large number of martyrs. The edition is printed in Gothic characters on two columns, decorated with many decorative letterings. The title is printed in red, with a big printer's mark of the lily flower, in a beautiful black frame in the shape of a portico under the auspices of God the Father represented as pope ; on the back is the Note to the Christians by Antonius Verlus of Vicenza. The framing is taken up on the first page of text adorned with a large A, representative in the background David praying to the Lord, and with, in facing-pages, a large full-page plate (Adoration des Mages), then 256 vignettes in the text, some repeated, all engraved on wood. The vignettes, according to Masséna, are from the Venetian edition of Zanni for Luc'Antonio Giunta in 1506, borrowed from the Giunta Bible, 15 October 1490, and from Legendario de Sancti . 1494. Note a series of vignettes depicting exorcisms and torments, one of which appears a guillotine. 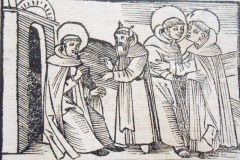 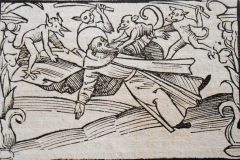 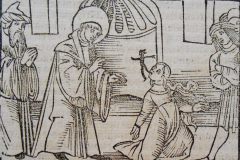 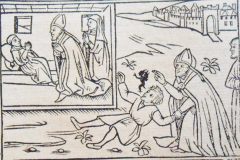 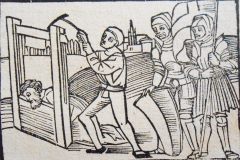 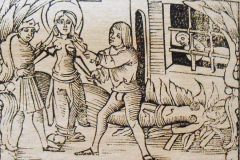 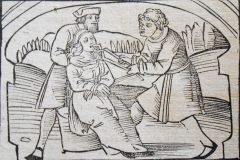 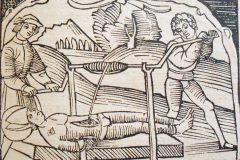 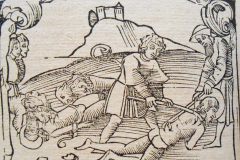 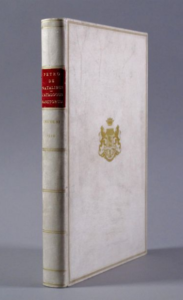 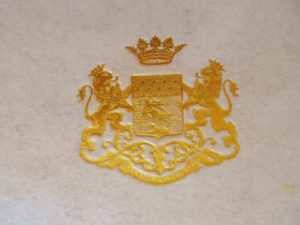