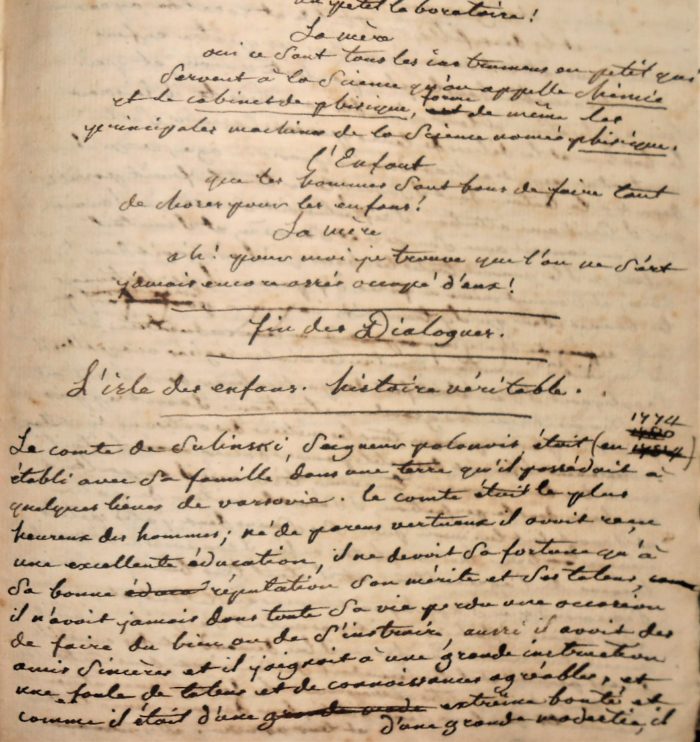 "This book is of a completely different kind. ; this is the foundation of a large building, all its merit must consist in its solidity" (Foreword, p. 26). 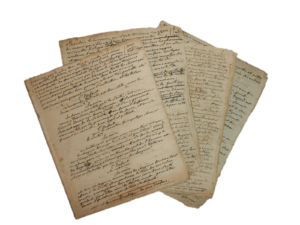 Stéphanie Félicité du Crest, Comtesse de Genlis (1746-1830). L’Isle des enfans. Histoire véritable. [ca. 1799]. Autograph manuscript in-4°. 56 pp. , unnumbered, divided into 3 sections. [With:] "Reflections on how agathes and other herbalized stones are formed, and on the alleged palingenesis of the ashes of ferns. " [ca. 1800]. Autograph manuscript. 6 pp. ½ numbered, in-4°. And an excerpt from Zoraïde, conte, 13 autograph handwritten lines on one p. in-16.

Manuscript autograph, deleted and corrected text, extract from the New Teaching Method, for early childhood, published in Hamburg and Brunswick, by Fauche, in 1799 and in Besançon, by Métoyer aîné, Printer-Bookseller, Grande-Rue, n° 480, an VIII [1800]. Ciranescu cites only the edition in 1801 by Maradan, expanded edition with four "Dialogues". 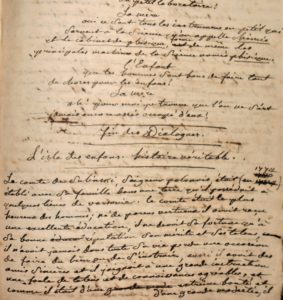 The tale is complete, preceded by the end of "Dialogue X"(from "promener par le plus beau temps du monde ") and "11th et dernier Dialogue, les jeux d’enfans " in its entirety, and followed by the beginning of the first of the "Pensée et Maximes détachées" (from "... son élève dès sa 1st enfance. En effet… ") the manuscript corresponds to the pp. 170 to 281 in the Besançon edition.

Children's games consist of "playing Madame ", real learning of the role of mistress of the house and mother of the family.

L’Ile des enfants is a moral and pedagogical tale, favorite work of Madame de Genlis, inspired by Daniel Defoe and a few years before The Swiss Robinson. Near Warsaw, the Count of Sulinski cuts down the trees of an island, playground of his four children, to allow villagers to warm up. The Count donated the island to the children in gratitude for their sacrifice; they made it a place of refuge for the most deprived and orphans, organizing themselves into a society based on the work of all, instruction, peace, virtue and morality. Kind of optimistic Lord of the Flies ...

The Reflections on how agathes and other herbalized stones are formed, and on the alleged palingenesis of the ashes of ferns are unpublished to our knowledge. They are preceded by the mention: "Unpublished memoir reserved for this edition ".  However, they do not appear in the Besançon edition, nor in those by Maradan (1801 and 1807) for which they were probably reserved. Indeed, Madame de Genlis mentions the color merchant Antheaume, active in Paris from 1800 to 1809; de facto, our manuscript probably dates from this period, after the editions of 1799 and 1800 of the New Teaching Method, for early childhood.

Madame de Genlis notes that "it is […] very detrimental to the advancement of science to confuse the invariable Laws of nature with the effects of hazard ; so it's a useful thing to destroy such a mistake, and this is what I propose to do in relation to herbalized stones and the alleged palingenesy of fern ashes., which is considered only as an isolated phenomenon and which is, as we shall see, only the effect of a fixed and general law. ". She will engage in meticulous descriptions, like Bufon does; she differentiates between "herbalized or wooded dendrites or stones ", nature games, of the "herborisations ", which are not the result of chance, because perfect and multiple. She then exposes "General comments that everyone was able to make ": systematic formation of the "white frost " [frost] and of the "Diane's tree " [dendritic amalgam of crystallized silver, obtained from mercury in a silver nitrate solution]. Madame de Genlis then presents "special experiences ": herbalization of agate recreated through the mixture of carmine with gummed lead white, yellow with Indian ink, milk residue on the wall of a glass. "The herbalization of stones is thus done in the earth, is the effect of only one hazard, that of the meeting of two fluid substances, of different colors uniting together […] the heaviest substance would always form the background. " Then Madame de Genlis praises the quality of Antheaume's preparations, color merchant for miniature, in Paris. "I only use his colors; the white of lead from England, and in general all that of trade is excessively coarse in comparison with that of Anthéaume, as well as the color named "massicot" [yellow] ". Then, she adapts herconclusions concerning the herbalisation of agates to " the alleged palingenesy of fern ashes ", phenomenon falling under the same laws, criticizing Valmont de Bomare in passing. Finally, she is still considering an experiment: try mixing vitrified and metallic materials, herbalization may be prevented by the violent heat of fusion; "it would be a test to do, and if it succeeded, we would have truly stolen from nature not an important mystery, but one of its prettiest secrets. " 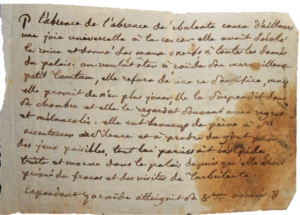