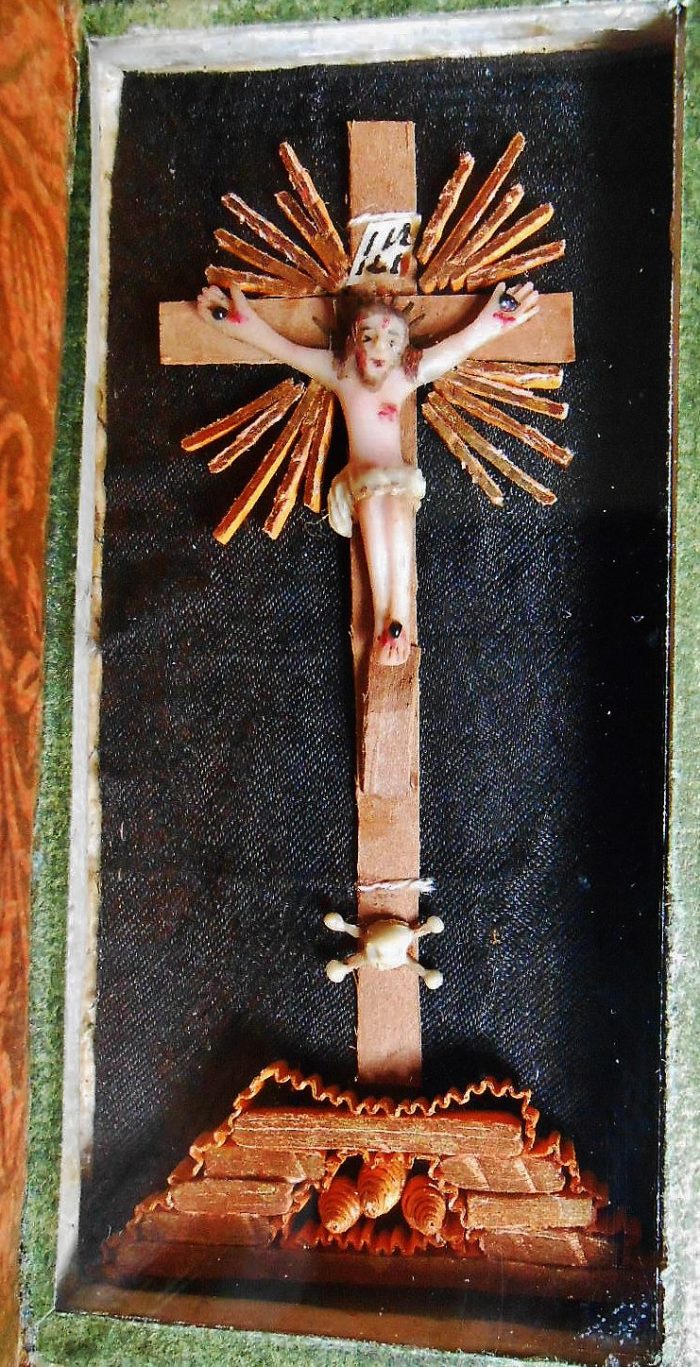 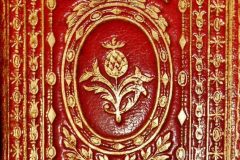 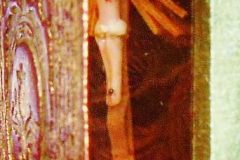 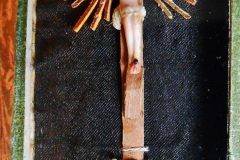 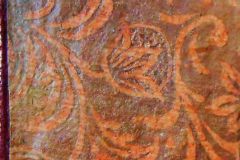 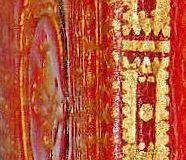 Fake Almanac, binding only, hiding a clandestine crucifix in a box glued to the back and back inner cover, the monting probably dating from the revolutionary era, around 1793. 10,6 x 5,5 cm. Contemporary red morocco , long back decorated with gilt fillets, tools and casters forming rectangular patterns with a central point, broad framing on covers consisting of a succession of 10 gilt tooled and casters, with, in the center, a pomegrenate tool in an oval medallion suspended by a knot and supported by two branches of pomegranate, with small gilt tools in spandrel, gilt casters on cuts, Augsburg gilded paper endpapers with rich orange floral motifs.

The crucifix, in the center of a balsa box, consists of a Christ in glory in polychrome wax (2,7 x 2,7 cm), on a balsa cross, delicately decorated with a remarkable work of golden paperolles, all on a burgundy red fabric ; the box is protected by an old bubbled glass, the sides, that form the edges of the book, are covered with green paper under gold.

This curious object of devotion is carefully hidden in a refined and elegant binding of one of those almanacs that were offered as etrennes under Louis XVI. The pomegranate depicted on the covers, ornamental tool frequently used at the time, discreetly represented for Christians the community of faithful, symbol of Jesus. Dechristianization organized during the French Revolution, for the benefit of the cult of Reason and then of the Supreme Being, made religious practice perilous. Crucifixes were abhorred when they were not destroyed, their possession making them suspicious, the royalists associating the fate of Christ the Redeemer who died on the cross with that of Louis XVI, martyr-king executed on the scaffold.

This almanac, emblematic of the Ancien-Régime, falsified for clandestine religious practices, is a strong testimony of the attachment to royalty and the church that its owner, woman or man of quality, felt, in spite of everything, during this tragic time.

It emerges all the more emotion.

Some rare and very discreet restorations. 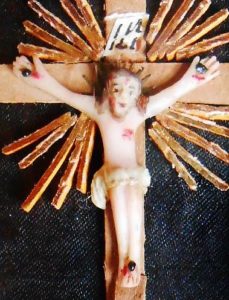