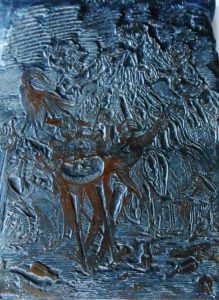 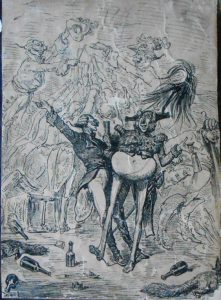 On the back, the corresponding ingraving is pasted to allow printers to locate themselves. Münchhausen, sort of German Tartarin, celebrates with General Elliot his last act of bravery; he just rescued two English officers by throwing a bomb in the middle of enemies with a slingshot, the same one that David used against Goliath! The comic and satirical verve of the artist, drolaticly caricatural, expresses itself fiercely in this drinking of English officers: the general is completely drunk, one of his officers vomits in the background while two others, mounted on a table or on their seats, toast over a pyramid of clink glasses, all against a background of overturned chairs and broken glasses, to the great fright of the cats of the house.

When he makes this wood, around 1862, the artist is at the top of his art. He illustrates the Tales by Perrault, between the Divine Comedy published last year, and Don Quichotte the following year. In the preface to the Aventures du baron de Münchhausen, Theophile Gautier praises the illustration of Gustave Doré : "nonbody better than this artist, who seems to have that visionary eye that Victor Hugo is talking about in his poem à Albert Dürer, does not know how to make life mysterious and profound the chimeras, dreams, nightmares, elusive shapes drowned in light and shadow; drôlatically caricatured silhouettes, and all the monsters of fantasy […] It looks like that, expedition painter, he has sketches by nature everything described by the mischievous German baron, and the text acquires an even more Germanic cold buffoonery value. He is really, in the beautiful expression of Jean Adhémar, "the king of illustrators (from) Romantisme Second Empire  ".

The engraving of this wood was entrusted to the talented chisel of François Pannemaker (Brussels, 1822 – Paris, 1900), one of Gustave Doré's leading engravers, but also illustrations of Erckmann-Chatrian's novels, and Voyages extraordinaires by Jules Verne at Hetzel. Further, he'll ingrave in 1863 few French banknotes such as the 100 francs blue, then in 1869, the twenty-franc Belgian banknote. Professor of woodcutting at the Imperial School of Drawing (the future National Graduate School of Decorative Arts), he exhibited in 1855 and was member of the jury in the woodcut section of the first International Exhibition of White and Black in Paris at the Flore Pavilion. In 1889, he was awarded a grand prize at the World's Fair in Paris. 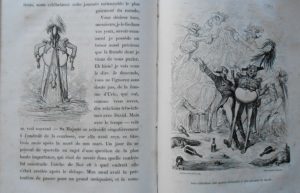