[Molière]. Armande Béjart (1638 ?-1700), French actress, one of the most famous during the seventeenth century, wife of Molière who wrote many roles for her, including that of Célimène in Le Misanthrope and who had founded with his mother Madeleine l'Illustre Théâtre. Document signed " Armande Gresinde Claire Eslisabet Bejart", Paris, the last day of March 1675 ; vellum oblong in 8 partly printed " Quittance des Rentes de l'Hostel de Ville", with tax stamp of the Generalitat of Paris. Thumb-indexed, burgundy morocco binding, "Armande Béjart" gilt on the back, gilt fillet on inner-covers, burgundy silk tabis, case with burgundy morocco on the edges, and burgundy paper on the covers. (P. L. Martin).

Beautiful signature of Molière's widow, only two years after the death of the great writer, on a pension receipt issued by Paris City Hall. 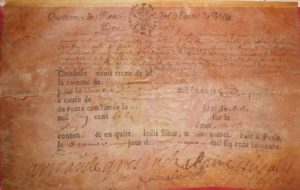 "In the presence of me adviser secretary to the King house of crown of France [Chevalier after the signature] M[iss] is Armande Gresinde Claire Elizabeth Bejard [sic] widow of Jean Baptiste Pocquelin sieur de Moliere upholsterer and king's footman, both in her name and as guardian of M[ iss]Marie Magdelaine Esprit Poquelin minor daughter o[is] dead she having right of the pension declared Miss[ iss]She, Jeanne Cusse, widow of Philbert Jolly squire adviser secretary of the king for contract of the [unreadable word] I present, the letter of regenication rendered accordingly on the fiveth of the month following th[is] contract [3 unreadable words] her companion. Confess to having received from M [unreadable] the sum of seventy-five pounds for the April slice thousand six hundred fifty-two because of three hundred pounds of annuity constituted on XXI day ofOctober Fif t een LXVIII on the clergy which she is satisfita & [and]th the said Sieur, & of all others. Done at Paris on last day of March one thousand six hundred seventy-five.

Molière had just died only two years ago, on 17 February 1673, and his daughter Marie Madeleine was only nine years old.

Precious document preserved in an elegant sober binding signed by Pierre Lucien Martin, (1913-1985), one of the most remarkable art binders of the XXth century. 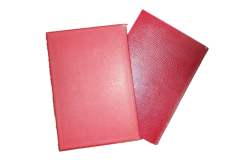 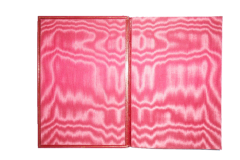 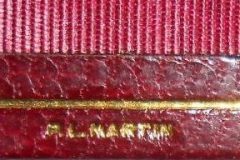 Small tear and two small holes in the edge of the vellum without affecting the text ; small restorations on the morocco and case.