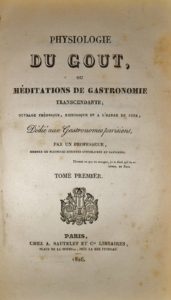 One of the most famous gastronomic works.

"Rare and highly sought-after first edition" according to Oberlin, who states that "this first edition, anonymous, was printed at the author's expense 500 copies only, and put into trade as early as December 1825. Brillat-Savarin did not enjoy the success of his book, because he died just two months after the sale, the 2 February 1826, without knowing it was going to become a classic. " First printing copy, with the “E” of "Bourse" on the title-page horizontally placed , and, in the second volume 2, the p. 45 numbered 49 and the paging 49 printed on the left.

Famous gastronomic work "that earned the author the glory of passing on to posterity" (Vicaire). "The original edition of this book is rare. The text has become a classic of the table, undisputed, filled with verve and good humor. The former magistrate who wrote it owes his fame to this one work whose aphorisms are known all over the world." (Carteret).

From the library of Baron Joseph-Etienne Alphonse of Ruble, with his ex-libris printed on the 2 volumes with his initial " R " surrounded with his motto " bona fide sine fraude ", with library label "Paris B 42". Alphonse of Ruble (Toulouse, 1834-id, April, 1898), member of the Academy des Inscriptions et Belles Lettres, historian and essayist, baron of Irish origin, inherited his uncle's library in 1877, 444 rare books. Member of French bibliophiles, he was appointed to prepare for the World's Fair 1878 (Ancient arts). 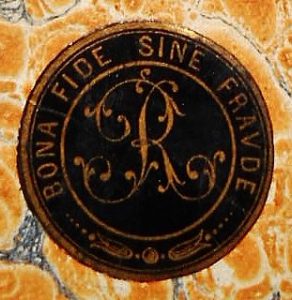 Rare copy in its contemporary binding.