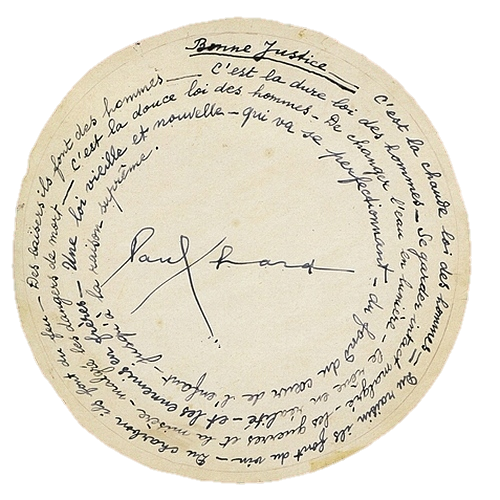 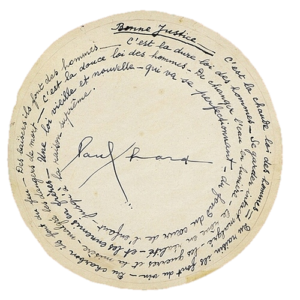 Moving poem, the last of the collection Pouvoir tout dire published by Gallimard in 1951, the year before the poet's death. It had previously been published in the’Almanach ouvrier-paysan from 1950 (autumn 1949), pp. 94-95, marked “Unpublished poem” and illustrated with a drawing by Edouard Pignon ; see also L. Parrot, Paul Eluard, 1953, p. 195.

Eluard, after Nusch's sudden death in 1946, had just met Dominique Lemort whom he married in 1951, and participated in numerous peace congresses (Poland, Paris, Mexico). The poem illustrates his state of mind : to his trust in Man, to the evocation of love, hope and fraternity, responds to the circular form of the calligram, harmonious cycle of life in its unity and rebirth.

His friend Picasso illustrated magnificently Bonne Justice in the 60.

This is the warm law of humans

From the grapes they make wine

From charcoal they make fire

From kisses they make men

This is the hard law of men

To keep themselves safe despite

Despite the dangers of death

This is the sweet law of men

To change water into light

And enemies into brothers

An old and new law

That continues to perfect itself

From the bottom of the child's heart

To the supreme reason.

Outer circle drawn in pencil, few foxes, piece of paper glued to the back with glue trace.